Three years ago today, my ex called me first thing in the morning (I'd just woken up).

"I have something to tell you," he said.
"Ok?"
"I'm cheating on you."
I started tearing up immediately. "Are you serious?"
"Yes. I'm cheating on you. I'm sorry."
I began to cry. My heart sunk down into my stomach. He began to laugh hysterically.
"HAHAHA! I got you! Oh my God, you actually think I'm cheating on you! HA!"
"That's not funny. You just gave me a panic attack. My heart was in my intestines!"
"HAHAHAHAH OH MY GOD I GOT YOU!"

Except, now I know that he wasn't actually joking. He even laughed about it on facebook: 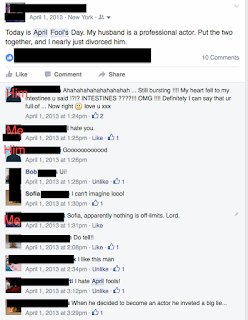 He actually did things like that a few times. Looking back, he was testing me to see if I'd believe him, and to see how much he could get away with. When he came back last summer, we went to a restaurant. They had a taxidermied moose head in the restaurant. He asked me to take his picture in front of the head, so that the horns were sticking out of his head (he ALWAYS wanted his picture to be taken, so he could post it on his facebook fan page). I did. When he posted it, he laughed, and said "This should get an interesting reaction..." I asked why, and he said "Because in my country, this means that a person cheated."

He also went on a talk show in his country where they asked him all kinds of super personal questions about his sex life. He admitted that he'd cheated and been cheated on ("in the past") and that he'd once had four relationships going at once. All of this was last year. He was talking about his life with me (though I never cheated on him...probably no one ever did, actually). And he was just talking about it in plain sight, on a "jokey" talk show, laughing about it. When I confronted him about it, he told me that "they were joking and I fell for the joke!" Lies. More lies.

As soon as the news of our divorce broke in the press, he removed those videos and pictures of him with horns from his page. I guess suddenly they weren't so funny when people might actually think they were true.

I hate April Fool's Day. I hate anything that celebrates taking advantage of people's trust. I hate lies and liars.
Posted by Lesson Learned at 1:28 PM