It's been awhile since I've written. That was partly a conscious choice. I needed a break from processing and sitting and wallowing in my thoughts and emotions. I purposefully made a choice to stop devoting so much of my time and energy to thinking about him. And that actually worked, for awhile. I've healed more in the last two months than I had expected to. But lately, stuff has been bubbling up again a bit, so I guess it's time that I sit down and deal with it.

September was a transformative month for me. My dog got well enough that I was able to take the trip to Sedona, AZ that I'd planned only a week or two ahead of time. My cousin came with me, and though it would have made more sense (and been much cheaper) for us to share a room, I told her that I needed my own room, because I fully expected to be crying essentially every moment I was there. But strangely, basically upon arrival, I felt a sense of calm and peace I hadn't felt in years. Granted, Sedona was (and still is) a Native American site of healing, and is well known in the metaphysical community for its vortexes. But even if a person doesn't believe in such woo-woo (or at least not as much as I do-do), it's not hard to understand why a place that looks like this could be restorative: 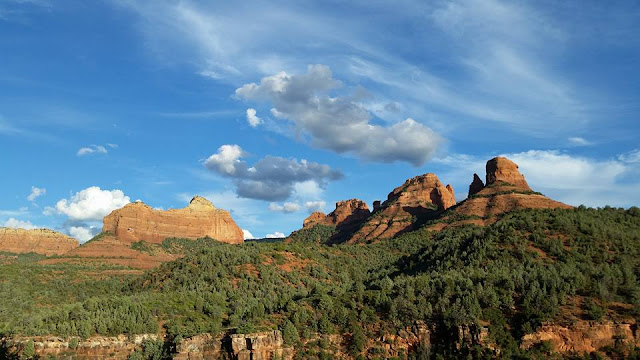 I went there with the intention of sitting quietly, allowing any thoughts and emotions I had to come up, and to try to meditate and fully let go of him and get back to myself. And I have to say, I was pretty successful. Even though I have a hard time meditating when I'm in  my apartment, or anywhere else, in general, I was able to go blank in Sedona. I literally sat on a rock, in the desert, and almost immediately my mind went white and I lost track of the fact that I was sitting on a rock in the desert (and really, really should have been wearing more sunscreen). I felt calm, peaceful and centered for the first time in years.

Another big draw was the famous Sedona night sky. Sedona is a no-light zone, meaning that all streetlights and other man-made sources of light are legally required to be capped and pointed downward so that no light bleeds up into the atmosphere. What it produces is a night sky so dazzling that the milky way can be seen, clearly and brightly, with the naked eye. I've always been a huge fan of the night sky, and stargazing in general, so I was literally giddy with excitement when, on our first night there, I looked up to see this: 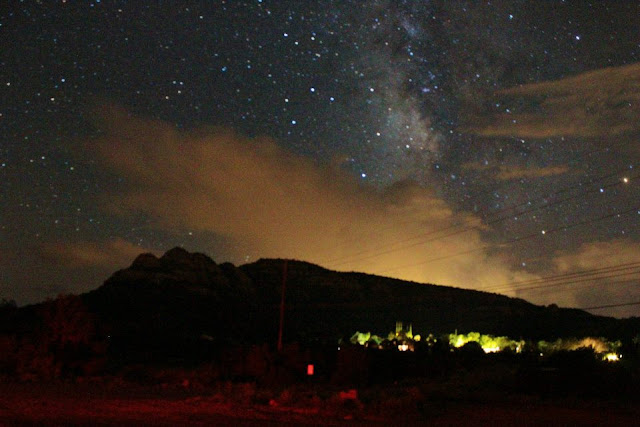 While I was there I discovered a new passion: night sky photography. Because, holy shit, when you have a sky like that, and the camera actually captures it--I couldn't sleep the first night because I was so excited that I'd actually been able to get the pictures I wanted.

On our second day there, my cousin had arranged for us both to have a vortex tour and healing with a local Shaman. As into all things metaphysical as I am, I was skeptical, but I was so desperate to get myself back on track and heal and let go of my pain that I was willing to try anything. I was also skeptical because it was just the two of us, meeting this guy at his house in the middle of nowhere. As we pulled up to his (ok, gorgeous, so that was a good sign) house, I said to my cousin "Should we really be doing this?" She texted her husband to give him the name and address of  who we were meeting and where he lived, just in case this was a terrible mistake and we were about to be left for dead in the desert. I even backed out of the driveway and we drove around aimlessly for 10 minutes so that we could do a gut check to make sure that we weren't being two very silly little girls from the country. We decided that it was probably ok, and went back to his house.

As it turned out, it was more than ok, and our tour guide/Shaman was the real deal. He was a kind, gentle spirit and he and I connected right away. He greeted us with a warm hug, and asked why we were there and what we wanted to get out of the day. I said that my heart had recently been shattered and I was going through a very tough divorce with the man who I thought was my twin flame, and I needed help in healing and letting go of him. The Shaman began to almost tear up and said he'd gone through something very similar a couple of years before, and that he thought he could help me. He gave me another hug, and I teared up, too.

Before we got into his SUV, he had us each pick a rune (in this case, small stones with the rune symbols painted on them) out of a box, and whatever we picked would be the focus for our time together. He told us to keep our eyes closed and pick whichever one "felt" the best. I handed him my chosen rock, and as he looked at it and then showed me the corresponding chart, he announced that I'd chosen "Forgiveness." "SHUT UP! NO WAY!" I exclaimed, as I spun around and practically threw the stone back at him. I could tell it was going to be that kind of day. 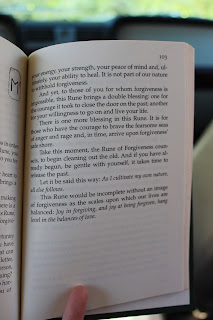 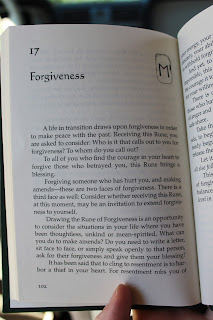 Pictures from the rune explanation book.

I could go into so much detail about all of the things that happened that day, but suffice it to say that there was a lot of hiking, sage burning, singing bowls, crystals, and crying (on my part) involved. I hugged a sacred tree and literally felt its energy. I laid on a rock by a river as the Shaman put crystals on my chakras and chanted, and while he did that, I had a vivid vision of a rose, and within the rose, was a spiraling vortex, and behind the vortex and the rose was the starry night sky. I came home and immediately painted that vision:
At the end of the 5 or 6 hours we spent together, my cousin and I were about to leave when the Shaman pulled me aside and asked if he could talk to me. I said "Sure."

"I don't know how to say this, but I got a message while we were at Bell Rock that I am supposed to ask you out. So...do you wanna go out with me?"

I stumbled for words. I realized the potentially questionable morality of the situation as soon as he started speaking, and all I could produce in response was a series of  embarassed "Uhhhhhs" and giggles while looking at my cousin, who was trying her hardest not to laugh at me. It also now made sense, and I knew I wasn't imagining that he had gently brushed my lips with his finger while he was waving sage over me at one point...once might have been an accident, but it happened, like, 3 times.

Still, I am a person who will do many things if I think it will give me a good story to tell (which, when I think about it, was exactly my mindset and is precisely how I got myself into the pickle of marrying a psychopath, really,) yet I went with it. When a Shaman in Sedona asks one out, one has to see that story through. So I said "Um, I mean...I'd be happy to talk more with you, since we seem to have a similar situation in common...and if you have any advice, as a person who has been through it, I'd be happy to hear it."

So we went to dinner the next night, at a sports bar. And he officially became my first date since I met my husband. Over buffalo chicken salad and margaritas, he told me that he just felt like I needed to get out and remember that there is still life in the world, and that I am a beautiful woman with value. He said that he wanted to talk more about my experiences with my husband, if I felt like sharing. And I shared, and cried (yes, in a sports bar), and he shared his experiences and what he's learned being on the other side of his discard, and it was a lovely conversation and connection, really. "You are going to meet someone around the end of this year who is going to want to be with you, and who would actually be great for you, but you're not going to be ready, and you're going to push him away. I did the same thing," he said. And I think he may be right...which I will go into detail with in my next post.

At the end of dinner, we shared a long hug, he kissed me on the cheek, and we said that we would keep in touch. I texted him later to thank him for being a beautiful soul who reminded me that there are good men out there. He thanked me for my kind words, and said that he was really glad he didn't grab my ass on my way out, lest it ruin my opinion of him. Turns out that shamen (shamans?) are also human and have senses of humor.

And that's the story of how the Shaman and Sedona, AZ gave me some of my mojo back.

When I came home, I was sunburnt, but calmer than I'd been in a long time. I felt like I had really made progress in letting go of all of the pain and attachment I had to my husband. I started painting again (see above). I started playing piano and singing, just for fun. I ran, like, 4 weekends in a row (and if you know me, you'd know that traditionally I only run if I'm trying to catch a bus). I started feeling really, legitimately GOOD.

And then in late September I started attempting to date...
Posted by Lesson Learned at 12:54 PM